Yoga for Mental Health…even our Prime Minister is doing it

Did you know yoga is good for mental health? 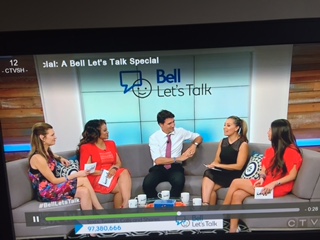 In last week’s Bell Let’s Talk special on?The Social (aired Jan 27, 2016) ?our Prime Minister, Justin Trudeau spoke?openly about mental health, how it has touched his life, his family, how he’d like to improve mental health services and what he does for his own mental health.

He shared that his job is stressful and at the end of the day?he remembers to “BREATHE“!!!

When asked how our Prime Minister?takes care of his?mental health

Prime Minster, Justin Trudeau shared?he likes long walks in the woods, canoeing, to get more grounding. He also shared his wife, Sophie has done a good job at trying to get him to do more yoga. He also likes boxing.

In ?December 9, 2015 Vogue’s article wife, Sophie Gr?goire-Trudeau shared she had an?arduous battle with bulimia as a teen. She says, ?Time, maturity, therapy, self-knowledge, yoga, meditation, and babies?all this eventually brought me to a healing space.? In fact, Sophie even?becoming a yoga instructor when?her husband eased into politics.

Visit?Bell Let’s Talk?to read Canadian Celebrity stories and how some of them also used yoga to help in their mental health journey.

Yoga for anxiety and depression

Studies suggest that this practice modulates the stress response.

Since the 1970s, meditation and other stress-reduction techniques have been studied as possible treatments for depression and anxiety. One such practice, yoga, has received less attention in the medical literature, though it has become increasingly popular in recent decades. One national survey estimated, for example, that about 7.5% of U.S. adults had tried yoga at least once, and that nearly 4% practiced yoga in the previous year.

Yoga classes can vary from gentle and accommodating to strenuous and challenging; the choice of style tends to be based on physical ability and personal preference. Hatha yoga, the most common type of yoga practiced in the United States, combines three elements: physical poses, called asanas; controlled breathing practiced in conjunction with asanas; and a short period of deep relaxation or meditation.

Many of the studies evaluating yoga?s therapeutic benefits have been small and poorly designed. However, a 2004 analysis found that, in recent decades, an increasing number have been randomized controlled trials ? the most rigorous standard for proving efficacy.

Available reviews of a wide range of yoga practices suggest they can reduce the impact of exaggerated stress responses and may be helpful for both anxiety and depression. In this respect, yoga functions like other self-soothing techniques, such as meditation, relaxation, exercise, or even socializing with friends.

A small but intriguing study further characterizes the effect of yoga on the stress response. In 2008, researchers at the University of Utah presented preliminary results from a study of varied participants? responses to pain. They note that people who have a poorly regulated response to stress are also more sensitive to pain. Their subjects were 12 experienced yoga practitioners, 14 people with fibromyalgia (a condition many researchers consider a stress-related illness that is characterized by hypersensitivity to pain), and 16 healthy volunteers.

When the three groups were subjected to more or less painful thumbnail pressure, the participants with fibromyalgia ? as expected ? perceived pain at lower pressure levels compared with the other subjects. Functional MRIs showed they also had the greatest activity in areas of the brain associated with the pain response. In contrast, the yoga practitioners had the highest pain tolerance and lowest pain-related brain activity during the MRI. The study underscores the value of techniques, such as yoga, that can help a person regulate their stress and, therefore, pain responses.

Questions remain about exactly how yoga works to improve mood, but preliminary evidence suggests its benefit is similar to that of exercise and relaxation techniques.

In a German study published in 2005, 24 women who described themselves as ?emotionally distressed? took two 90-minute yoga classes a week for three months. Women in a control group maintained their normal activities and were asked not to begin an exercise or stress-reduction program during the study period.

Though not formally diagnosed with depression, all participants had experienced emotional distress for at least half of the previous 90 days. They were also one standard deviation above the population norm in scores for perceived stress (measured by the Cohen Perceived Stress Scale), anxiety (measured using the Spielberger State-Trait Anxiety Inventory), and depression (scored with the Profile of Mood States and the Center for Epidemiological Studies Depression Scale, or CES-D).

At the end of three months, women in the yoga group reported improvements in perceived stress, depression, anxiety, energy, fatigue, and well-being. Depression scores improved by 50%, anxiety scores by 30%, and overall well-being scores by 65%. Initial complaints of headaches, back pain, and poor sleep quality also resolved much more often in the yoga group than in the control group.

One uncontrolled, descriptive 2005 study examined the effects of a single yoga class for inpatients at a New Hampshire psychiatric hospital. The 113 participants included patients with bipolar disorder, major depression, and schizophrenia. After the class, average levels of tension, anxiety, depression, anger, hostility, and fatigue dropped significantly, as measured by the Profile of Mood States, a standard 65-item questionnaire that participants answered on their own before and after the class. Patients who chose to participate in additional classes experienced similar short-term positive effects.

Further controlled trials of yoga practice have demonstrated improvements in mood and quality of life for the elderly, people caring for patients with dementia, breast cancer survivors, and patients with epilepsy.

A type of controlled breathing with roots in traditional yoga shows promise in providing relief for depression. The program, called Sudarshan Kriya yoga (SKY), involves several types of cyclical breathing patterns, ranging from slow and calming to rapid and stimulating.

Another study examined the effects of SKY on depressive symptoms in 60 alcohol-dependent men. After a week of a standard detoxification program at a mental health center in Bangalore, India, participants were randomly assigned to two weeks of SKY or a standard alcoholism treatment control. After the full three weeks, scores on a standard depression inventory dropped 75% in the SKY group, as compared with 60% in the standard treatment group. Levels of two stress hormones, cortisol and corticotropin, also dropped in the SKY group, but not in the control group. The authors suggest that SKY might be a beneficial treatment for depression in the early stages of recovery from alcoholism.

Since evidence suggests that yoga can tone down maladaptive nervous system arousal, researchers are exploring whether or not yoga can be a helpful practice for patients with post-traumatic stress disorder (PTSD).

One randomized controlled study examined the effects of yoga and a breathing program in disabled Australian Vietnam veterans diagnosed with severe PTSD. The veterans were heavy daily drinkers, and all were taking at least one antidepressant. The five-day course included breathing techniques (see above), yoga asanas, education about stress reduction, and guided meditation. Participants were evaluated at the beginning of the study using the Clinician Administered PTSD Scale (CAPS), which ranks symptom severity on an 80-point scale.

Six weeks after the study began, the yoga and breathing group had dropped their CAPS scores from averages of 57 (moderate to severe symptoms) to 42 (mild to moderate). These improvements persisted at a six-month follow-up. The control group, consisting of veterans on a waiting list, showed no improvement.

About 20% of war veterans who served in Afghanistan or Iraq suffer from PTSD, according to one estimate. Experts treating this population suggest that yoga can be a useful addition to the treatment program.

Researchers at the Walter Reed Army Medical Center in Washington, D.C., are offering a yogic method of deep relaxation to veterans returning from combat in Iraq and Afghanistan. Dr. Kristie Gore, a psychologist at Walter Reed, says the military hopes that yoga-based treatments will be more acceptable to the soldiers and less stigmatizing than traditional psychotherapy. The center now uses yoga and yogic relaxation in post-deployment PTSD awareness courses, and plans to conduct a controlled trial of their effectiveness in the future.

Although many forms of yoga practice are safe, some are strenuous and may not be appropriate for everyone. In particular, elderly patients or those with mobility problems may want to check first with a clinician before choosing yoga as a treatment option.

But for many patients dealing with depression, anxiety, or stress, yoga may be a very appealing way to better manage symptoms. Indeed, the scientific study of yoga demonstrates that mental and physical health are not just closely allied, but are essentially equivalent. The evidence is growing that yoga practice is a relatively low-risk, high-yield approach to improving overall health.

Saper RB, et al. ?Prevalence and Patterns of Adult Yoga Use in the United States: Results of a National Survey,? Alternative Therapies in Health and Medicine (March?April 2004): Vol. 10, No. 2, pp. 44?49.